AFAA interview with Richard C. Lampe, Tape 1 of 2, Side A
Download

AFAA interview with Richard C. Lampe, Tape 1 of 2, Side B
Download 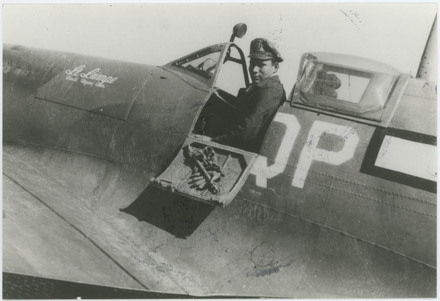 In this two-part oral history, fighter ace Richard C. Lampe discusses his military service with the United States Army Air Forces during World War II. In part one, he describes his wartime experiences as a fighter pilot, including his time in the Mediterranean and European Theaters with the 2nd Fighter Squadron of the 52nd Fighter Group. Topics discussed include his personal background, his training and service history, and his combat missions in Europe. Special focus on two combat missions in which Lampe scored aerial victories: one on June 11, 1944 over Bulgaria and one on July 2, 1944 over Romania.

The content on Side A and Side B is very similar and was likely recorded as two separate takes. Both sides are included here for the sake of completeness.

Richard C. Lampe was born on February 10, 1920 in El Paso, Texas and grew up in Globe, Arizona. When the United States officially entered World War II, Lampe was already enrolled in the Civilian Pilot Training Program. He immediately volunteered to join the Army Air Forces and completed his flight training in February 1943. A few months later, Lampe was deployed to a replacement depot in Berrechid, Morocco, where he was selected for the 2nd Fighter Squadron of the 52nd Fighter Group. During his tour, he flew Supermarine Spitfires and North American P-51 Mustangs over Italy, Romania, Bulgaria, and other areas of the Mediterranean and European Theaters. After the war, Lampe joined the Air Force Reserve, retiring as a major in 1969. As a civilian, he co-founded the Lampe Hearing Aid Center with his wife and daughter. Lampe passed away in 2000.