The Bruce Whitman Aviation Art Collection is a collection of artwork including a drawing, posters, lithographs, photographs, and advertisements primarily related to American military aviation from about 1917 to the early 1950s. The materials were grouped by subject and then arranged alphabetically.

The majority of materials are related to either World War I or World War II. Most of the lithographs and posters consist of U.S. Army, Army Air Forces, and Navy recruiting, enlistment, and propaganda posters. One item of note is an original drawing of a USAAF Lockheed P-38 Lightning, which would have been used to create posters for distribution. There are also a few illustrative lithographs depicting military aircraft.

The collection includes a few non-military aviation items such as magazine advertisements, including ones for TWA and Mobiloil; a poster for the 1939 New York World's Fair; and a photomechanical print of an American Airlines plane.

The majority of items are vintage posters, prints, and lithographs, but a few items are modern reproductions.

Digitized Materials: Most of Series I (World War I) and Series II (World War II) and a selection of items from Series III (Commercial and other military aviation) have been digitized from this collection.

Most materials are in English. One item is in French.

Permission to publish material from the Bruce Whitman Aviation Art Collection must be obtained from The Museum of Flight Archives.

Wings of the morning [magazine advertisement for Command-Aire aircraft] 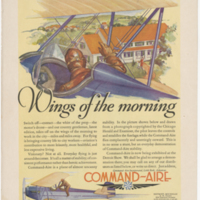 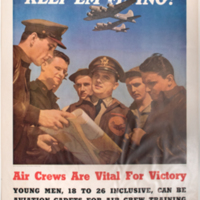 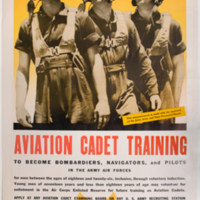 Poster of three servicemen in flight gear, circa 1943. Text: "This announcement is made with the approval of the Joint Army and Navy Personnel Board. Aviation Cadet training to become bombardiers, navigators, and pilots in the Army Air Forces for men… 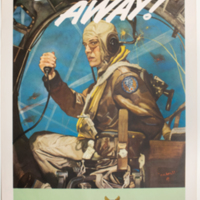 Poster of a U.S. Army Air Forces bombardier at his station, circa 1944. Explosions are visible through the Plexiglas. Art by Cecil Calvert Beall.Text: "Bombs away! / The greatest team in the world. AAF."

Join the Air Service and serve in France / Do it now 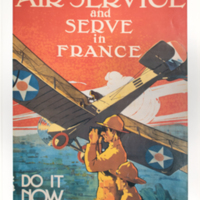 Poster of U.S. Army Air Service servicemen with an aircraft in the background, circa 1917. Art by J. Paul Verrees. Text: "Join the Air Service and serve in France / Do it now."

Mine eyes have seen the glory [Women's Army Corps poster] 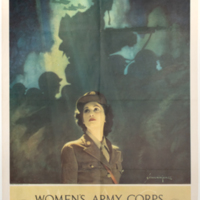 Poster of a U.S. Women's Army Corps (WAC) servicewoman with soldiers and aircraft silhouetted in the background, circa 1944. Art of Jes Wilhelm Schlaikjer. 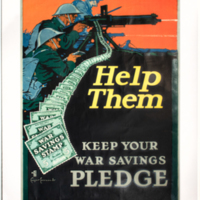 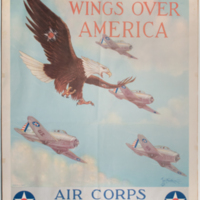 Poster of four U.S. Army Air Forces Seversky P-35 aircraft and an eagle in flight, circa 1939. Art by Tom B. Woodburn.

Join the Air Service / "Give 'er the gun" 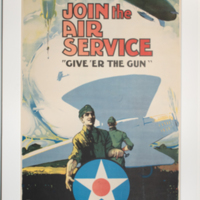 Poster of two U.S. Army Air Service servicemen with aircraft, a balloon, and an airship, circa 1918-1919. Art by Warren Keith, produced by the Edwards & Deutsch Litho. Company. Text: "Join the Air Service / 'Give 'er the gun / Learn. Earn."

Poster of four U.S. Army Air Forces Seversky P-35 aircraft and an eagle in flight, circa 1939. Art by Tom B. Woodburn.
View all 27 items