The Elmer A. Ball World War II Negatives is a collection of 184 photographic negatives taken by Ball during his service with the U.S. Navy, much of which took place in Guam during the later years of World War II. The negatives are all medium format black-and-white negatives, except for one color transparency. They were not organized in any particular manner.

The images depict a variety of people, activities, and buildings in and around Naval Air Station Agana on Guam from roughly 1944-1950. Many of the images are related to the Combat Air Service Unit CASU(F) 12, which Ball may have been a part of. The majority of images, about 65, are informal individual and group portraits of servicemen at and around the base. Candid shots of men in the course of both work-related and leisure activities make up about 35 images. Included among those are images of men in Structural Department work tents and huts, relaxing in their bunks, writing letters or reading, exploring beaches, or holding their mascot dog "Foo Foo." Buildings such as the CPO club, rows of Quonset huts, tents for work areas such as a paint shop or sheet metal shop, and an outdoor theater are depicted in many of the images. A cemetery for American servicemen at Agat, Guam is pictured in a few images. Eight images show men in Naval uniform at a dance or party with women, most likely somewhere in the U.S., perhaps at NAS Sandpoint in Washington, rather than on Guam.

Beyond military personnel and activities, local people, likely Chamorro, are depicted in about five images. Local buildings such as churches, a school, and thatch huts are also pictured in a few negatives. Some of the buildings show destruction from bombings. About 20 images show seascapes and landscapes around the island. One color transparency depicts an unidentified stone statue.

Digitized Materials: This collection has been digitized in its entirety.

Guide to the Elmer A. Ball World War II Negatives

Permission to publish material from the Elmer A. Ball World War II Negatives must be obtained from The Museum of Flight Archives. 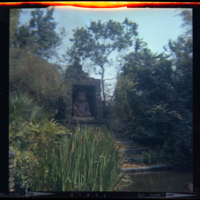 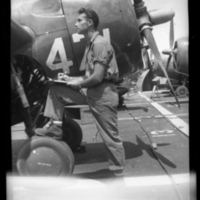 Photographic negative of a U.S. Navy serviceman with a General Motors FM-2 Wildcat aircraft, Guam, circa 1944-1950. 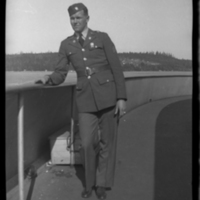 Photographic negative of a U.S. Army serviceman leaning on a low wall, possibly on a ship, circa 1944-1950.

[Servicemen at military base] 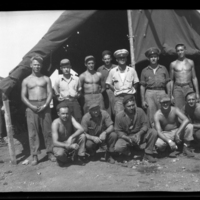 Photographic group portrait of U.S. Navy servicemen at a military base, Guam, circa 1944-1950. An aircraft is partially visible on the left. 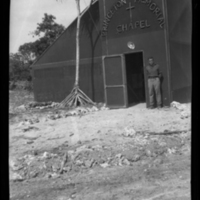 Photographic negative of U.S. Navy serviceman Elmer A. Ball outside the Princeton Memorial Chapel, Guam, circa 1944-1950.

[Servicemen in base paint shop] 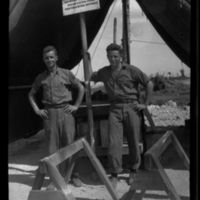 Photographic negative of two U.S. Navy servicemen in the base paint shop, Guam, circa 1944-1950. The sign on the pole reads: "Paint Shop / No work done without permission from Engineering Officer."

[Servicemen at military base] 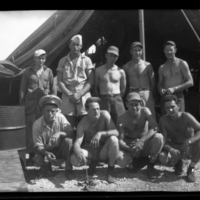 Photographic group portrait of U.S. Navy servicemen at a military base, Guam, circa 1944-1950. 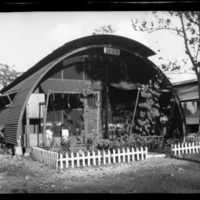 Photographic negative of a Quonset hut with a garden and small picket fence, Guam, circa 1944-1950. The sign on the hut reads: "CPO2." 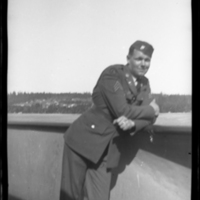 Photographic negative of a U.S. Army serviceman leaning on a low wall, possibly on a ship, circa 1944-1950.

[Tented work area at military base] 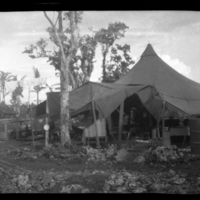