The World War II-era Propaganda Posters is a small collection comprised of posters mass-produced during the years of 1939 to 1945. The collection includes both vintage posters and some modern reproductions of World War II posters.

The posters illustrate the United States government's wartime initiatives that were publicized to American civilians, such as propaganda to persuade the public to purchase war bonds or take on jobs to support the needs of the military. The posters range in size from 9.5 x 12 inches to 24 x 36 inches and include examples of works by artists Norman Rockwell, Joseph Anderson, Stevan Dohanos, Carolyn Moorhead Edmundson, Arthur Fisher, Allen Russell Saalburg, and Georges Schreiber.

The collection has been arranged into four series that reflect the thematic elements of the poster: Series I. "Careless talk" campaign, Series II. Recruitment, Series III. War bonds, and Series IV. Assorted posters. There are two subseries within the Recruitment series that highlight items related to the recruitment of women for various wartime jobs and recruitment posters for the United States Army Air Forces. Series IV. contains assorted posters that fall outside the main themes of the collection but still provide documentation of World War II campaigns, such as fuel shortages and the manufacturing of fighter planes.

Digitized Materials: A representative selection of items have been digitized from this collection.

Permission to publish material from the World War II-era Propaganda Posters must be obtained from The Museum of Flight Archives.

You can have silver wings 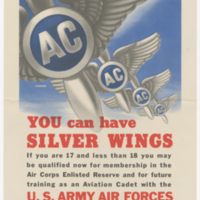 Poster of U.S. Army Air Corps "prop and wings" badges, 1943. Text: "You can have silver wings / If you are 17 and less than 18 you may be qualified now for membership in the Air Corps Enlisted Reserve and for future training as an Aviation Cadet with… 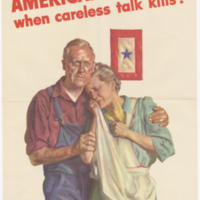 Poster of a mother and father grieving news from a telegram, 1943. Art by Harry Anderson. Text: "Americans suffer when careless talk kills!"

Your war bonds are a stake in the future 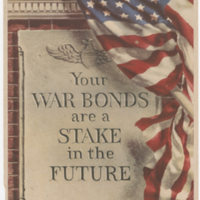 Poster of an American flag and a sign promoting war bonds, 1943. Art by Allen Saalburg. Text: "Your war bonds are a stake in the future." 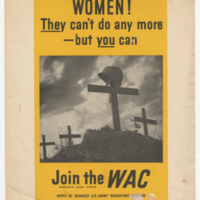 Poster of grave markers and a soldier's helmet, circa 1940s. Text: "Women! / They can't do any more -- but you can / Join the WAC / Women's Army Corps / Apply at nearest U.S. Army recruiting station.

Bits of careless talk are pieced together by the enemy 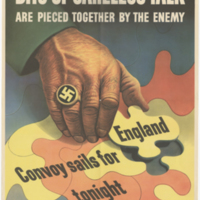 Poster of a hand wearing a Nazi ring piecing together a jigsaw puzzle, 1943. Art by Stevan Dohanos. Text: "Bits of careless talk are pieced together by the enemy / Convoy sails for England tonight." 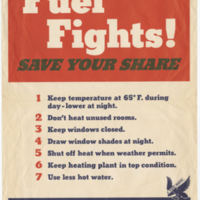 Poster promoting fuel conservation, 1943. Lists tips on how to conserve coal, oil, and gas for the war effort. Text: "Fuel fights! / Save your share / 1. Keep your temperature at 65 degrees F during day - lower at night. / 2. Don't heat unused rooms.… 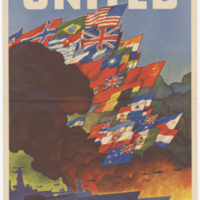 Poster of flags from Allied nations flying above ships, tanks, and aircraft, 1943. Text: United / The United Nations fight for freedom." 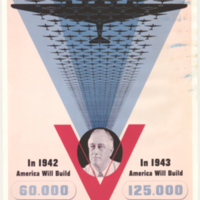 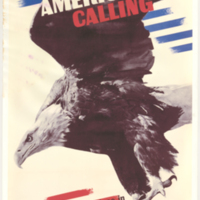 Poster of an eagle and the U.S. Civilian Defense emblem, undated reproduction based on an original design from 1941. Photograph by Arthur H. Fisher. Text: "America calling / Take your place in Civilian Defense."

"Never was so much owed by so many to so few" 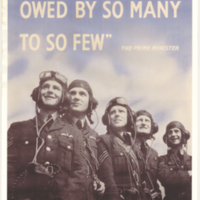 Poster of Royal Air Force servicemen in flight gear, undated reproduction by Vintage Arte, based on an original design from the 1940s. Numbered 101 of 2500. Text: "'Never was so much owed by so many to so few.' The Prime Minister."
View all 13 items