The Bruce Mennella Vietnam War Collection relates to the 1968-1972 military service of Mennella, an Air Intelligence Officer in Naval Fighter Squadron 114 (VF-114), nicknamed "Aardvark Squadron." The bulk of the collection consists of photographs taken by Mennella of the aircraft and activities of his squadron while serving in Vietnam and Laos. There is also a small amount of printed ephemera.

Five photograph albums include 311 photographic prints depicting Mennella's training and service from 1968-1972. The photographs are primarily color snapshots, smaller than 4x5 inches. The first album consists of 67 prints showing Mennella and fellow servicemen of Class 26. A few images, both in black-and-white and color, show Mennella receiving his commission from his father at Pensacola, Florida. Included are some scenes in New Orleans, Louisiana. There are also a few images of the Blue Angels at Pensacola before they had officially been authorized by Congress.

The second and third albums date from the squadron's first cruise and include 161 prints. Scenes depicted include a stopover and practice off Hawaii; Da Nang airfield; aerial views over Vietnam; vertical replenishment with a ship providing supplies and a helicopter that would deliver packages; underway replenishment with an oiler boat alongside the carrier; Mennella briefing squadrons via television; various scenes on the deck of the carrier; and a stopover in Hawaii before heading home. Personal images of Mennella meeting up with his parents and a former foreign exchange student in Japan are also included.

An album titled "Louise Philippines Hong Kong" was created by Mennella's wife, Louise, when she and other squadron wives came to visit in early 1971. The 68 color photographs and various pieces of ephemera do not depict any military service, but show the Mennellas and some of the other military families on vacation.

A personal album kept by the donor included 15 photographs and other pieces of ephemera related to Mennella's service that were removed from the album to be included with the collection. These materials include a program for a 1971 dinner-dance; a program for the 114 fighter squadron change of command, 1971; telegrams; assorted clippings; and photos of servicemen and their wives and the return of the squadron after their first cruise in July 1971.

In addition to the photographs in the albums, there are numerous loose prints. Included are 77 aerial reconnaissance photographs of Vietnam and Laos from 1971-1972, most of which were taken by a North American A3J-3P (RA-5C) Vigilante, which was used in tactical reconnaissance during the Vietnam War. Most of the images include identifying information, such as geographic information (name of country, coordinates), date, position, frame, and sequence number. Additionally, most include boxes and arrows with accompanying text identifying targets, including bridges, buildings, railroads, roads, vehicles, military supply and armament depots, and harbors. Some images capture before-and-after shots of aerial bombardment and missiles and bombs in flight prior to detonation.

There are an additional 149 photographic prints and 266 color negatives and transparencies, primarily snapshots from 1968-1972 but also including some official military photographs. The majority of images do not include captions or identifying information. However, a few handwritten notes with the prints provided by Mennella identify general themes, such as "Flight Deck Operations and Aircraft Stuff," "Taiwan Air Force, 1st Mission, 1971," "North Vietnam Junks," "Pete Pettigrew," "Ready room on USS Kitty Hawk," "[USS] Kitty Hawk," "Munitions," "Mennella as Intelligence Officer," "Location Photos - Tokyo, Hong Kong, Sasabo," "Blue Angels Air Show," and "People, Mostly in Squadron." Mennella also provided additional identifications for the negatives. Some of the loose photos and negatives are duplicative of images found in the albums.

The images depict military personnel, including two group portraits of "Aardvark Squadron" in front of an aircraft. In the black-and-white group portrait Bruce Mennella is fifth from right in the back row and in the color group portrait, Mennella is third from right in the center row. Images show soldiers in casual settings, onboard the USS Kitty Hawk, and with aircraft. Among those pictured throughout the collection are Joe Cruz, Judd Holenza, Bob Hughes, Terry Jones, Pete Kellaway, John Kerr, Tom Koehler, Doug Mathews, Mike McCabe, OJ Pender, Pete Pettigrew, Commander John Pitzen, John Porter, Pete Stolle, Pete Thompson, Sargeant Washington, and others.

Aircraft depicted include McDonnell-Douglas F-4 Phantoms, Grumman A-6 Intruders, and LTV A-7 Corsairs. A few images show the Taiwan Air Force in flight for a 1971 mission. Other images depict shots of aerial bombardment, including one oversize aerial photograph of a McDonnell RF-4C Phantom II and a S-75 Dvina (Missile) in flight over the village of Phu Dong (Vietnam), before-and-after shots of bombing runs, and the ready room and flight deck operations of the USS Kitty Hawk. Additional photographs depict North Vietnamese junks [ships] at sea; scenic shots featuring civilians, such as rice farmers; and scenes from urban and rural life. Identified locations include Tokyo and Sasebo (Japan) and Hong Kong (China).

In addition to the visual materials, there is a small amount of printed ephemera, including a "United States Navy Fighter Weapons School" decal and a 48-page booklet entitled "Summer of '72" that contains inside jokes and comics featuring "Joe Cool" [Snoopy's alter ego] that reference people and events from the combat tour. Additionally, a partial Pacific Stars and Stripes newspaper, dated May 9, 1972, is included as well as a photocopy of an issue of the NAS Miramar newsletter with a picture of Mennella.

At the end of the collection are 26 color photographs of the Blue Angels performing at the Marine Corps Air Station Miramar Air Show, circa 1970-1971.

Digitzed Materials: A selection of materials representing Mennella's military service has been digitized from this collection.

Permission to publish material from the Bruce Mennella Vietnam War Collection must be obtained from The Museum of Flight Archives. 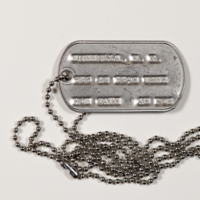 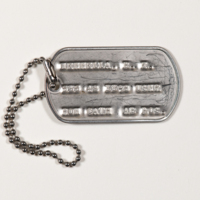 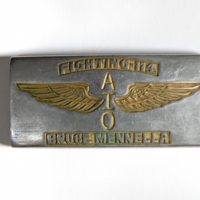 Silver metal belt buckle with engraved face. The face of the buckle has a top and bottom banner with a set of wings flanking "AIO" in the middle. The banners read: "FIGHTING 117" and "BRUCE MENNELLA." The detailing on the front is all filled in with… 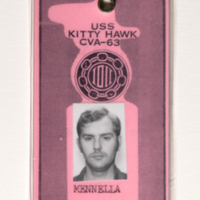 A laminated pink paper identification badge for Officer Mennella of the USS Kitty Hawk, CVA-63. The badge reads "USS / KITTY HAWK / CVA-63" at the top. There is a black circle in the middle, with an internal boarder which looks like a chain, and 1011… 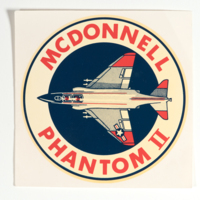 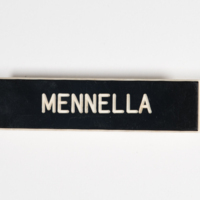 White plastic identification pin with black face. Carved in is "MENNELLA." The pin is secured on back with two butterfly pins mounted on a metal bar. 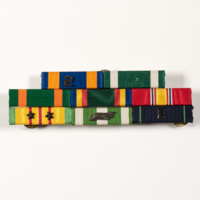 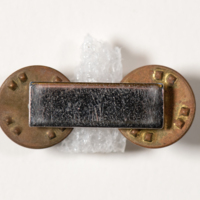 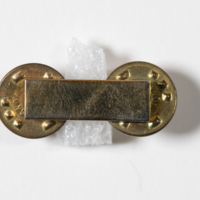 Golden metal rank pin, believed to be Navy Ensign pin. Secured on back with two butterfly backs on posts. One of a pair. 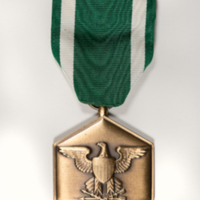