The Orville Wright Letter consists of one 4-page typed letter by Orville Wright signed on Wright Company letterhead, dated April 7, 1915, to Frederick Eppelsheimer of the New York Herald, discussing the possibility of using a pendulum to provide lateral stabilization to an aircraft, which he had publicly demonstrated in 1913. The letter also mentions the death of his brother Wilbur in 1912, references fellow aviation pioneer Glenn Curtiss, and alludes to the 'patent wars' lawsuits. The letter is accompanied by a small matte-finish portrait of Eppelsheimer, dated 1918, apparently used for a passport.

Guide to the Orville Wright Letter

Permission to publish material from the Orville Wright Letter must be obtained from The Museum of Flight Archives. 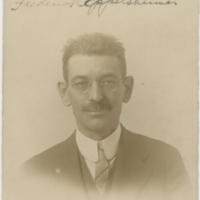 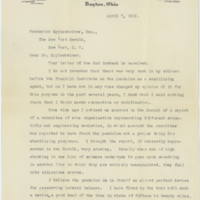 Letter to Frederick Eppelsheimer of the New York Herald from Orville Wright, April 7, 1915. Discusses the use of pendulums in providing lateral stabilization for aircraft and the conditions necessary for soaring or hovering flight. Also mentions the…
View all 2 items