The collection is primarily correspondence from Jackson to his fiancée-then-wife, Helen Jane "Tyke" (Klinger) Jackson. The correspondence is sorted chronologically, beginning with his training at Randolph Field, Texas and culminating with his assignment in the Aleutian Islands in 1942. Also included are condolence letters to Helen Jane Jackson, ranging from 1942-1946 (bulk are in 1942-1943).

Additional textual materials include Jackson's identity card and three certificates, including a U.S. Army Air Corps commission, a 1943 Purple Heart award, and recognition and gratitude from President Roosevelt for his sacrifice. There are also assorted newspapers and clippings related to the Aleutian Islands campaign and Jackson's service and death, which were grouped with a September 17, 1942 notification of death/condolence letter from Captain Mavis P. Kelsey to Mrs. Bess Jackson, Major Jackson's mother.

A photocopy of a notebook created by Helen Jane Jackson, circa 1942-1943, is also present. Helen Jane created the original notebook as a memento for their daughter Barbara, who was still a baby when Jackson died in service. The notebook begins with a personal letter from Helen Jane to Barbara and includes excerpts from Thomas Walter Jackson's letters to Helen Jane (copied in Helen Jane's handwriting), condolence letters from other military personnel at the time of his death, clippings about the Aleutian Island campaign, and images of Barbara as a baby. Original materials from the notebook include a September 17, 1942 notification of death/condolence letter from Captain Mavis P. Kelsey to Mrs. Helen Jane Jackson, a September 18, 1942 telegram informing Helen Jane that Jackson was missing in action since September 14, 1942, and an October 1, 1942 condolence letter from "Frank" (identified by the donor as Captain Francis F. Pope) to "Tyke." There are also several empty mail envelopes.

Twenty-one black-and-white photographs are also included, which vary in size from 2x3" to 8x10". Images depict Jackson, in both casual and posed settings; other military personnel; and obscured aircraft. An October 20, 1942 condolence letter from Leola McDonald to Helen Jane Jackson accompanies two photographs of Thomas Walter Jackson, one a casual group shot, the other a portrait of Jackson. Most of the photographs include brief captions on the reverse, providing contextual information such as names, dates, and locations. Per donor information, the flash drive contains digital video clips taken from 8mm film clips of Thomas Walter Jackson.

Digitized Materials: The archival materials and one object have been digitized from this collection. The content of the flash drive is not currently available.

Permission to publish material from the Thomas Walter Jackson World War II Collection must be obtained from The Museum of Flight Archives. 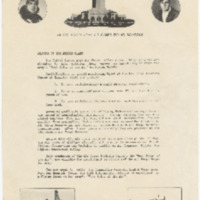 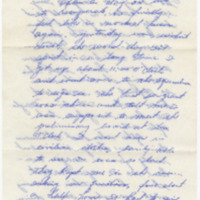 Items from Box One, Folder 3 of the Thomas Walter Jackson World War II Collection, circa 1939-1940. Folder contains 17 letters written by Jackson to his fiancée, Helen Jane Klinger, during his time stationed at Moffett Field, California. 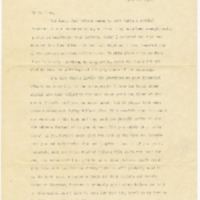 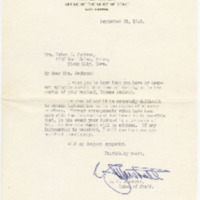 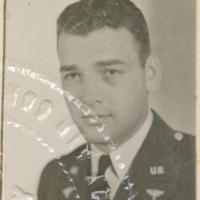 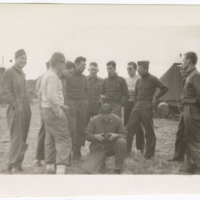 Photograph of a group of U.S. Army Air Corps pilots gathered outside, Alaska, circa 1942. Thomas Walter Jackson is fifth from the left, standing.Inscription on verso: "Walt Jackson with a squadron of pilots - Alaska - 1942. (Flew P38s)." 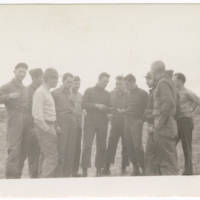 Photograph of a group of U.S. Army Air Corps pilots gathered outside, Alaska, circa 1942. Thomas Walter Jackson is sixth from the left.Inscription on verso: "Walt Jackson (Capt.). Alaska '42." 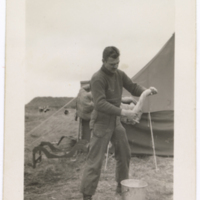 Photograph of Thomas Walter Jackson washing a garment in a bucket, Alaska, circa 1942.Inscription on verso: "Alaska - '42. Walt Jackson." 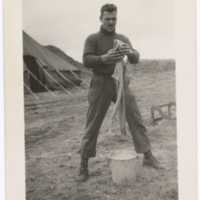 Photograph of Thomas Walter Jackson washing a garment in a bucket, Alaska, circa 1942.Inscription on verso: "Walt Jackson in Alaska on war duty. 1942." 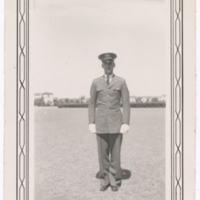