The Margery Watson World War II Photographs is a small collection comprised of a series of photographs either taken or gathered by Margery Watson while she was employed at North American Aviation in Inglewood, California as a draftsperson between 1943-1945. The photographs are primarily small black-and-white snapshots that document NAA personnel adding a Merlin engine and performing engine tests on the prototype P-51 nicknamed "Baby" for United States Army Air Force ground crews. Some of the photographs feature group portraits of the design team with a few names indicated. There are a couple of photographs of uniformed airmen as well. One portrait of Watson standing in front of a plane, which was removed from a shadowbox including some of her tools, is also present in the collection.

Also included in the collection are several small collectible photographs of military aircraft developed by various manufacturers in the 1940s. Some photographs are affixed to album pages which have a few pieces of small ephemera glued to them as well.

Digitized Materials: The archival materials and one object, one of Watson's drafting tools, have been digitized from this collection.

Permission to publish material from the Margery Watson World War II Photographs must be obtained from The Museum of Flight Archives. 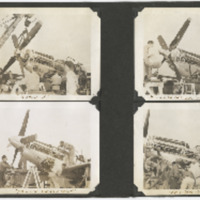 Photograph album pages containing 28 photographs and small ephemera related to Margery Watson's work at North American Aviation in Inglewood, California, circa 1940s. Watson worked as a draftsperson from 1943 to 1945 and helped to develop…