AFAA interview with James N. Cupp, Tape 1 of 1, Side A
Download

AFAA interview with James N. Cupp, Tape 1 of 1, Side B
Download 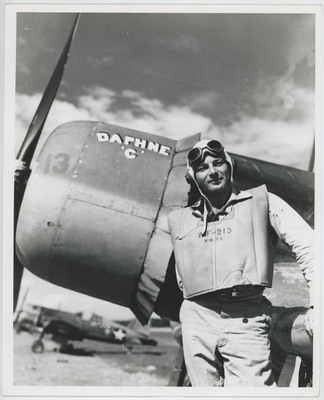 Fighter ace James N. Cupp discusses his military service with the United States Marine Corps during World War II. He describes his wartime experiences as a fighter pilot and his time in the South Pacific with Marine Fighting Squadron 213 (VMF-213). Special focus on a combat mission over the Solomon Islands on July 15, 1943 in which Cupp shot down two Japanese aircraft: a Betty and a Zero.

James N. Cupp was born on March 28, 1921 in Corning, Iowa. He entered the Naval V-5 program in 1941 and was commissioned in the United States Marine Corps the following year. Cupp served with Marine Fighting Squadron 213 (VMF-213) in the South Pacific until September 1943, when he was shot-down over the Solomon Islands. After an extended hospital stay for severe burns, he returned to active duty in February 1945 as a naval flight instructor. Cupp remained in the military after World War II, serving with the 1st Marine Brigade during the Korean War and afterwards with the 3rd Marine Air Wing. He retired as a colonel in 1968 and passed away in 1984.

Permission to publish material from the American Fighter Aces Association Oral Interviews must be obtained from The Museum of Flight Archives.