AFAA interview with Louis E. Curdes, Tape 1 of 1, Side A
Download

AFAA interview with Louis E. Curdes, Tape 1 of 1, Side B
Download 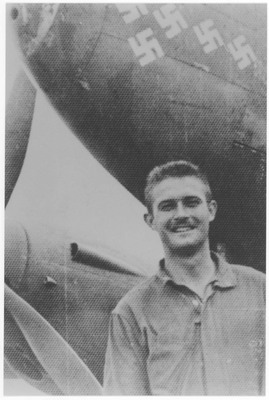 Fighter ace Louis E. Curdes is interviewed by historian Douglas E. Clanin about his military service with the United States Army Air Forces during World War II. Curdes describes his wartime experiences as a fighter pilot, including his time with the 82nd Fighter Group in the Mediterranean Theater and with the 3rd Air Commando Group in the Pacific Theater. He also touches on his postwar career with the United States Air Force. Topics discussed include his time as a prisoner-of-war in Italy, his escape back to Allied-controlled territory with the help of Italian Partisans, his combat missions in Europe and the South Pacific, and his participation in the Berlin Airlift.

Louis E. Curdes was born on June 11, 1919 in Fort Wayne, Indiana. He joined the United States Army Air Forces in 1941 and graduated from flight training the following year. Curdes served two combat tours during World War II, one with the 82nd Fighter Group in North Africa and one with the 3rd Air Commando Group in the South Pacific. During his time in the Mediterranean Theater, he spent several months as a prisoner-in-war in Italy; he eventually escaped back to Allied lines with the help of Italian Partisans. Curdes remained in the military after the war and retired as a lieutenant colonel in 1963. Some of his postwar assignments include helping to form the Indiana Air National Guard and participating in the Berlin Airlift. Curdes passed away in 1995.