The Lee Embree Collection contains photographs, textual materials, and audiovisual materials that relate primarily to Embree's 1936-1945 military service, including a small number of photographs taken by Embree of the Japanese attack on Pearl Harbor in 1941, as well as documents his post-war activities ranging from 1945-2005.

Series I, Textual materials, includes Embree's military personnel papers, including his identification card as well as military orders and medal documentation. There are two (2) pilot log books, a 1935-1946 one belonging to Embree and a 1918-1921 one to Lucius L. Jones with a note written by Embree, "This book was given to me by mother. She said I was named after him. Lee Embree." Underneath a pencil notation states “Lee’s Mother’s Brother.” There is also a diary documenting Embree's arrivals and departures of oversee deployments from March 16, 1943 through June 20, 1945. A small scrapbook includes various clippings from unidentified publications about Embree's military service, as well as a small amount of military orders.

Additional materials in this series include a typed manuscript, "The Military Career of Lee R. Embree, May 1941-January 1, 1942," and a small amount of ephemera that includes five (5) postal stamps featuring the Isle of Man, a photocopy of a rough draft of the December 8, 1941 speech given by President Franklin D. Roosevelt to Congress after the bombing of Pearl Harbor, a photocopy image of Embree and his first wife, Betty, smiling after he was awarded the Soldier's Medal, a photocopy of a June 4, 2001 speech delivered by Embree at Choice School, Port Angeles, Washington (State), a Blue Angels poster, and a postcard featuring members of the Pearl Harbor Survivors Association.

Series II, Photographs and negatives, which makes up the bulk of the collection, includes a total of fifty-nine (59) negatives, two hundred ninety-two (292) loose photographs, and a photograph album containing one hundred forty-one (141) photographs, most likely taken by Embree during and after World War II. The negatives are 4x5" and include originals as well as duplicates. There are three (3) color negatives; the rest are black-and-white. The bulk of the photographs are in black-and-white and are 8x10", though there is some variance in sizes. Many images have captions providing contextual information and many also include stamps and/or numbers on the image. Some duplication occurs.

Box Two, Folder 1 includes nineteen (19) black-and-white photographs taken by Embree at Hickam Field, Hawaii during the bombing of Pearl Harbor on December 7, 1941. The prints, which are primarily later photographic and digital reproductions rather than vintage prints, include detailed, type-written descriptions by Embree on verso. They depict Boeing B-17 Flying Fortress and other aircraft damaged by Japanese pilots, both on the ground and in flight, military personnel, and one (1) snapshot which appeared on the December 29, 1941Life Magazine cover depicts smoke billowing from theUSS Arizona after being hit by attacking Japanese aircraft.There is also one (1) photograph taken in 1991, when President George H. W. Bush visited for the 50th Anniversary. It was taken by Embree, in the exact same spot as the famous photograph, and shows Air Force One on the ground. Additionally there is one (1) photocopy of a photograph of two men directly after their release from the Japanese prisoner-of-war camp, Santa Tomas Internment Camp.

Box Two, Folders 2-3, includes loose photographs, which are a mix of snapshots and portraits, that broadly depict World War II military personnel both involved in recreational activities and engaged in military operations, such as deployments, driving tanks, and manning weapons. Along with American troops, Italian, Chinese, and German forces are featured. Primarily American miltary tanks, aircraft, and ships are also depicted as well as notable figures such as President Franklin D. Roosevelt, Josef Stalin, and Winston Churchill. Identified locations include Hawaii, the Philippines and Italy. There are some photographs, likely souvenir shots not taken by Embree, in the European Theater. Additional photographs include aerial shots, and a snapshot of Eleanor Roosevelt.

Box Two, Folders 4-6, is comprised of photographs related to Embree’s work at Edwards Air Force Base photographing rocket test projects from 1953-1961. These items were originally housed in an album with a spine label, "Photo Album of Camera Locations of the Rocket Test Sight [sic] At Edwards Air Force Base" and cover label, "USAF Publications." Subjects include 1/3-sized model rocket silo, rocket test tracks, aircraft, including the Bell X-5 and Douglas X-3 Stiletto, and effects of experiments on the involved cameras, such as melting and breakage.

Box Two, Folder 7, includes eleven (11) photographs, including five (5) images that were made into calendars featuring an aircraft or scenic view, one (1) image features twelve aircraft, including the North American B-45 Mitchell and Lockheed T-33, on the tarmac and six pilots standing in front of the aircraft, including Chuck Yeager and Fred Ascani; a partially obscured view of the Martin (Glenn L.) XB-51 (Model 234), and an image showing a [Mr. Magoo?] character chasing a flying object with the letters UPA in the right hand corner. Additionally, there are three (3) copies of an image taken in March 1956 by Pat Clark of Warner Brothers. One copy has an inscription on verso, "USAF and Warner Bros. personnel while on location at Edwards Air Force Base during the filming of "Toward the Unknown."

At the end of the series is a brown leather photograph album with one hundred forty (140) photographs and one (1) clipping from an unidentified publication. Most pages include 1-2 images glued or taped to the page. The bulk of the shots are aerial photographs, many depicting air fields all over California, Arizona, Washington (State), Oregon, Idaho, and Wyoming. Aircraft are featured, in flight, including in formation as they fly through the Grand Canyon, and on the ground, including the Douglas B-18 and North American O-47. There are a very small amount of candid images featuring Russian pilots Mikhail Gromov, Sergei Danilin, and Andrei Yumashev, as well as six (6) publicity shots from the MGM movie, "Test Pilot."

Digitized Materials: Only items from Series I (Textual materials) and Series II (Photographs and negatives) have been digitized.

Guide to the Lee Embree Collection

Permission to publish material from the Lee Embree Collection must be obtained from The Museum of Flight Archives. 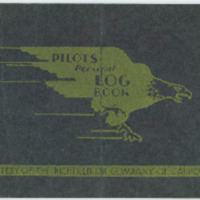 Pilot logbook for Lee Embree, circa 1935-1945. The address listed at the beginning of the log is: "Base Operations Office, March Field, California." Seventeen (17) pages. 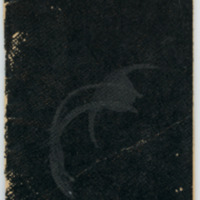 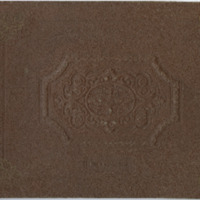 Photograph album containing one hundred forty (140) photographs and one (1) clipping, circa 1920s-1970s. Many of the photographs were most likely taken by Lee Embree, an aerial photographer who served in the Pacific Theater during World War II. The… 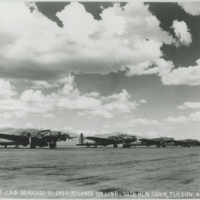 [Lee Embree and others in jeep during parade] 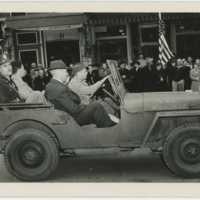 Photograph of Lee Embree (seated in backseat) and others riding in a jeep during a parade in Anamosa, Iowa, September 24, 1942.Item from a small scrapbook containing photographs, documents, and clippings related to Lee Embree's military service,…

[Lee Embree and others in jeep during parade] 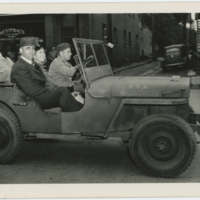 Photograph of Lee Embree (seated in backseat) and others riding in a jeep during a parade in Anamosa, Iowa, September 24, 1942.Item from a small scrapbook containing photographs, documents, and clippings related to Lee Embree's military service,…

[Lee Embree and others on stage] 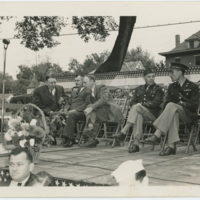 Photograph of Lee Embree (far right) and others seated on a stage during an event in Anamosa, Iowa, September 24, 1942.Item from a small scrapbook containing photographs, documents, and clippings related to Lee Embree's military service, circa…

[Lee Embree and others on stage] 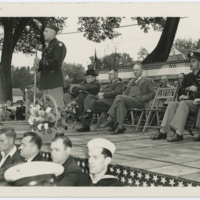 Photograph of an unidentified servicemen addressing a crowd at an event in Anamosa, Iowa, September 24, 1942. Lee Embree (second from right) and others are seated on the stage behind him.Item from a small scrapbook containing photographs, documents,… 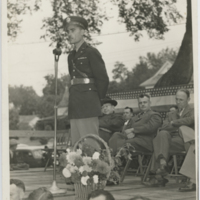 Photograph of Lee Embree addressing a crowd during an event in Anamosa, Iowa, September 24, 1942.Inscription on verso: "Lee Embree. Sept. 1942. Parade in Anamosa, Iowa. Speech after parade in the park."Item from a small scrapbook containing…

[Aichi D3A Vals in flight above smoke near Pearl Harbor] 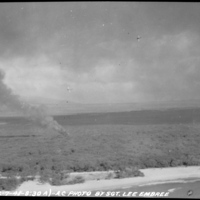